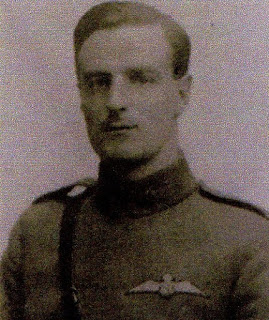 Herbert Alfred Hope was born at 173 Adelaide Road, Hampstead, London on 6 December 1890 to Alfred T. Hope and his wife Emma. Alfred was working as a "printer's traveller". In 1901 the family moved to 142 West Green Road in Tottenham. Alfred started his own printing business at 15-16 Friar Street, London and by April 1911 he and Emma had moved to "Endsleigh" at 8 Manor Road, Westcliff on Sea with their four children, William, Herbert, Leonard and May.  During the Great War Herbert, who was working as a clerk/cashier,  joined the Army and was commisioned as a 2nd Lieutenant in the Royal Flying Corp. He was sent to the Military school at Thetford for pilot training. He was trained on a Maurice Farnum biplane and received his pilot's wings on 14 March 1917 and was assigned to 25 Squadron on the Western Front.
The life expectancy for a new pilot was very short and so it would be for Herbert. He died on 28 June 1917 from injuries resulting from an accident while landing. He is buried in plot V.A.11 at Lapugnoy Military Cemetery, France. Oddly, the records of The Royal Aero Club give his date of death as 8 August 1917.