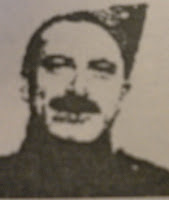 Cecil Stuart Brunsden was born in London and came to Westcliff when his parents moved here in 1894. He lived with his parents at 47 Milton Road, where they ran a linoleum store, until his marriage at which time he moved to "Redcot" in Silverdale Avenue. He enlisted in the Army in October 1914 and served with the Royal Flying Corp where he was promoted to Corporal (2nd airman) and continued to serve when the corp became the Royal Air Force in 1918. He came home on leave for the first time in October 1918 but on his return to France he developed pneumonia and died on November 18 - just seven days after the end of the war.
Posted by ernest at 13:22