Gathorne Hardy deserves an apology. His name appears on the St.Alban's war memorial and in the book of remembrance as "Gaythorne".  Gathorne was born in Wood Green in London in 1898. He was the son of successful businessman William Hardy (1838-1907) and his second wife Geraldine.The couple were married at St.Mary Abbots, Kensington in 1896 and their son Gathorne was baptised at St. Michael at Bowes, Bowes Park, Southgate on 24 July 1898.In the baptism book William is described simply as a "Gentleman" but on the later 1901 census we learn that he was a "retired contractor". Soon after this the family, which included William's daugher, Laura, by his first marriage, moved to Westcliff where they took up residence at White Lodge, 38 St.Vincent's Road, Westcliff where the employed one Ada Barker as a servant and Eliza Freakley as a nurse for young Gathorne.


William Hardy died on 28 May, 1907 leaving a phenomenal (for the time) £32089  11s  8d and Gathorne was sent to be educated at King Alfred's Grammar School at Wantage and Mrs. Hardy moved to "San Remo" 45 Canewdon Road. War broke out in 1914 and as soon as he was old enough Gathorne joined the army and, like so many of his class, was soon commissioned as a 2nd Lieutenant and served with The Royal Irish Fusiliers. He was seriously wounded in action on 12 April 1918 at Wulverdhem   Nr Midland Farm, taken prisoner by the Germans,  and died of his wounds in captivity  on 30 April 1918 in Flanders and is buried there in the Kortrijk Communal Cemetery, plot 23, West-Vlaanderen, Belgium. In his will he left £57 to his mother (her address is now given as 49 Canewdon Road). Geraldine Hardy returned to London where she died at Kensington, age 83, in 1943. 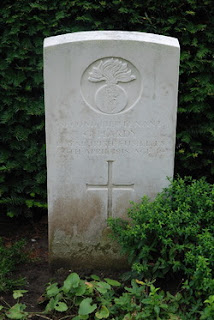 As I finished writing the above I decided to visit St.Vincent's Road to photograh "White Lodge", the Hardy home at No.38. Sadly the house no longer exists, having been destroyed by a German bomb on 10 December 1943. The same bomb also destroyed Nos 36  and 34 St.Vincents Road. Frederick Robert Sapey and his wife Lily May lived at 34 - both were killed and both were members of the St.Alban's congregation, their names appearing on the World War Two memorial plaque.