Eccles Carter was born in 1854 in Taunton Somerset. He came Southend in the 1890's with his wife, Emily, and two daughters. Eccles was a Stock Exchange agent and lived at 3 Clifton Terrace, Southend. He was one of the earliest choirmasters at St.Alban's Church. In the Memorial Chapel (The Holy Name Chapel) there is a metal cross which, within its hollow base, has the inscription "Gift of the Choirmen in gratitude for the services of their choirmaster Eccles Carter, Christmas 1901"  It is possible that this gift to the church was made at the time of Carter leaving the church and retiring to his native West Country where he died 24 February 1930. 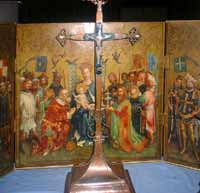 Some confusion has been caused by the fact that the name Eccles Carter also appears on the First World War Memorial plaque. After some research I can state categorically that this is not the same Eccles Carter who was choirmaster at the church.  This is how I believe the mistake was made: In The Southend Standard of 9 October 1914 their appeared a report of the death of Royal Naval Lieutenant Eccles Carter (b. Kensington 1892) who was lost on H.M.S. Pathfinder on 5 September of that year. I believe that somebody at the newspaper recognised the distinctive name and wrote in the paper that he was "late of Westcliff", not realising that they were two different people. Because of this his name was added to the War Memorial while Eccles the choirmaster enjoyed his retirement elsewhere!

As Lt. Carter appears on the memorial plaque (even if by mistake) it is worth saying something about the circumstances of his death.  Pathfinder was sunk off St. Abbs Head, Berwickshire,Scotland on Saturday 5 September 1914 by the German U-21, commanded by Lieutnant zur See Otto Hersing. Typical of the scout cruisers' poor endurance, she was so short of coal whilst on patrol that she could only manage a speed of 5 knots, making her an easy target. The ship was struck in a magazine, which exploded causing the ship to sink within minutes with the loss of 259 men. The explosion was actually seen by Aldous Huxley who was staying at Abbs House at the time. He wrote about it in a letter to his father dated 14 September : "I dare say Julian told you that we actually saw the Pathfinder explosion — a great white cloud with its foot in sea. The St. Abbs' lifeboat came in with the most appalling accounts of the scene. There was not a piece of wood, they said, big enough to float a man—and over acres the sea was covered with fragments—human and otherwise. They brought back a sailor's cap with half a man's head inside it. The explosion must have been frightful. It is thought to be a German submarine that did it, or, possibly, a torpedo fired from one of the refitted German trawlers, which cruise all round painted with British port letters and flying the British flag."