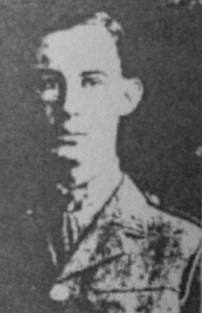 John "Jack" Ormond Smellie was born in Georgetown, British Guiana on 12 May 1896. His parents were William George Smellie (1865-1946) and his wife Anne Jane Pinkerton McCowan (1866-1941). Young Jack  and his elder brother, William (known by his middle name "Archie"), born 2 September 1894,  were sent England to be educated at Cranleigh School in Surrey and during the holidays they lived with their uncle Dr. John Clementson Smellie at 273 London Road, Westcliff, Essex. Dr. Smellie was a member of the St. Alban's congregation. Jack excelled in sports and represented his school at Aldershot in both foil and sabre events.

When war broke out both Jack and his brother joined the army. Jack was commisioned as a Lieutenant in The King's Own Royal Lancaster Regiment and later transferred to the Machine Gun Corps. He fought in two engagements on the Somme and wrote of his experiences to his cousin Geoffrey :

"Since I last wrote, we've been through it. The push has begun and I was in at the start. My God, it was bloody hell let loose. We had the whole Division cut up and how I got through, God only knows. It was certain death to anyone going over the parapet and 10 to 1 in the trench. The fellows fell like flies. It was ghastly to say the least. I had half a team knocked out before we had gone ten yards leaving me six men for two guns. I can't give out full details and really I don't want to. We will be in again and though it is a pretty good ordeal, I am longing to have another go at the -----. Archie [his brother] was on my left and came through: he is in again, as apparently his Division did not suffer so badly as ours. He's acting company commander of 'C' Coy. It was very interesting and we managed to get some good work done with the M.G.'s on the Hun counterattacking - stopped him before he got through his own wire even. I had everything torn during our tour of 36 hours fighting, even my boots. I got hung up with a tripod on our own barbed wire. I really had cold feet for a moment then, as it was there that half the team went down. Not only the Hun's first two lines, but our front line was absolutely flattened and it was impossible to walk along, both for dead, wounded and bashed in dugouts. The British have taken 10,000 prisoners up to date along our front."

It was in his third engagement, at Le Sars on the Somme on 1 October 1916, that John was hit in the neck and paralysed while advancing with his men.  He was repatriated to England and spent some time at Netley Military Hosptal near Southampton before being moved to Sir John Ellerman Hospital at  Regent's Park. John's parents made the perilous wartime sea voyage to England to see their son. William Smellie had to return home in May 1917 but his wife Anne stayed on with her son whose condition worsened until he died on 8 August 1917. He was buried in Sutton Road Cemetery in Southend with full military honours. 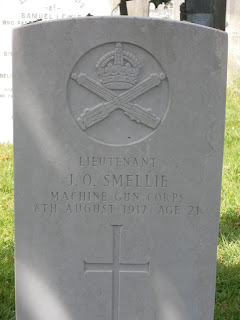 Despite having been wounded on two occasions, including six gunshot wounds, while serving with the Dorsetshire Regiment, Jack's brother, Archie, survived the war and remained in the army, serving with his regiment in India, Malta, Egypt, Sudan and Palestine. Although in his mid-forties he was recalled to the army in  1939 and posted to Dover. He was ship's adjutant on the Isle of Man ferry Mona's Queen when it made its last crossing to Dunkirk on 29 May 1940, hit a mine and sank within two minutes. Archie was  rescued by H.M.S. Vanquisher but later fatally injured by a shell burst on the ship and died 1 June 1940.  He is buried at Malo-les-Bains Cemetery, Dunkirk. Archie's son, Herbert John "Larry" Orpen-Smellie, continued the famiily military tradition and had a distinguished military career, rising to the rank of Lt. Colonel and becoming a champion rifle marksman, representing his country on many occasions. He also celebrated his 70th birthday by doing a bunjay jump in New Zealand! He passed away in 2002. His son is Lt.Colonel Giles Rackley Orpen-Smellie  formerly of The Parachute Regiment, now of The Sandhurst Foundation.


Dr. John Clementson Smellie, Jack and Archie's uncle, was born in Georgetown, British Guiana on 12 June 1870. He studied medicine in London. He set up his practice as doctor and surgeon in Westcliff on Sea, living in a 12 room house at 39 Leigh Road, Westcliff (Leigh Road was renamed London Road - the original street name can still be seen on the side of the nearby Cricketeers Public house - and the house number became 273). Dr. Smellie married his wife Lilian in 1900 and they had two children, both born in Westcliff, Rachel (born 1903) and James (born 1904). In 1911 the family employed two servants, Daisy Clarissa Chapman and Alice Matilda Norman. After his retirement Dr. Smellie moved to "Hillsboro" 39 Fernside Road, Poole, Dorset. He died on 12 Sept 1943 (his wife died the previous year) leaving £8820 to a fellow doctor. The house at 273 London Road was boarded up for many years but has now been restored and is occupied again.

I am heavily indebted to the website of the Thomas Austin Family for much of the information in the above article.

"I have identified that Jack served in 70 Machine Gun Company, which was part of 70 Infantry Brigade.

On 1 July 1916, 70 Brigade was serving as part of 8 Division in III Corps.  They were the left brigade of the left division of the Corps with X Corps on their left.  Archie served in 1 DORSETs, which was part of 14 Infantry Brigade of 32 Division in X Corps.  They were the right brigade of the right division of X Corps.  Thus the brigades in which the two brothers fought on 1 July 1916 were adjacent, which explains how they were able to meet in the aftermath, as described in Jack's letter.

70 Brigade returned from 8 Division to 23 Division on 17 July 1916.  The divisional history of the 23 Division reports Jack being wounded while describing the Division's attack on Flers on 1 October 1916.  It seems that he was hit in the neck and was paralyzed.  It was as a result of this wound that he died on 8 August 1917."