THE WEST WINDOW and THE BARNEY FAMILY

The great West Window of St.Alban's church is dedicated in memory of Eliza Barney and her daughter Ida Maria Sophia. Eliza Snowden was born in Georgetown, Demerara in British Guyana, South America in 1849. In the 1870's she married William Barney a textile agent and Yorkshire Dress and Goods merchant and they lived in Camberwell, Surrey. Their daughter, Ida Mary Sophia was born in 1875. Sometime after 1891 The Barney's moved to Southend in Essex where they lived at 23 Park Road.  Eliza died in 1926 leaving £684 8s 9d. She was followed three years later by William who left £11107 9s 11d to the public trustee.


Their daughter Ida married Arthur S. Underwood (b.1878) in the summer of 1915. Their son, Flying Officer Edward Underwood was killed on active service in Norway in 1944 age 21. He is buried in the Aseral Churchyard in Norway. He is commemorated on the St.Alban's World War Two memorial. Ida continued attending St.Alban's Church for many years and died in 1958. 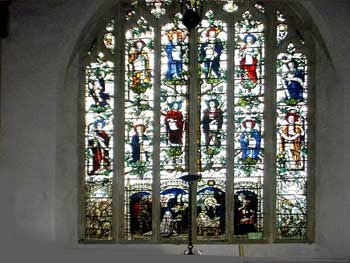 Designed and Executed by A. H. Nicholson.

The subject which the design illustrates are the words of Our Lord "Ego Sum Vitis Vos Dalmites."
The tree rises up from behind a picture of the Nativity, or rather of the Epiphany, with the figure of the Blessed Virgin and Child, the three Kings and Joseph. In the background will be seen the camels on which the Magi have travelled and the City of Bethlehem. The Star shines over the cot in which the young Child lies. On either side are censing Angels kneeling in worship.

The Tree on which the figures of the Apostles stand or kneel ia a conventional type suggestive of the vine, and each of the Apostles bears the special attributes and emblems and holds in his hand the portion of the Creed with which tradition has associated him. At the top of the window is the emblem of the Holy Spirit surrounded by rays.

Note: The Great West Window is probably the most outstanding feature in the church it needs to be seen to appreciate its true beauty, no photograph will ever be able to do it justice.

(Inserted in 1927 at a cost of £1000 given by an anonymous benefactor in memory of Eliza Barney and her daughter).

(Description of the window by Bill Sanders, former Sacristan of St.Alban's based on an old document.)
Posted by ernest at 05:41