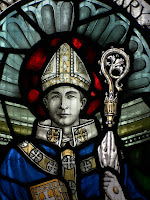 Hilary Alexander Henry Symonds Kenny is one of many of those who died in The Great War who are commemorated in this church. Hilary was born in Bromley, Kent on 11 January 1895. His parents were Dr. Alexander Symonds Kenny and his wife Mary Grace Kenny (ne' Nicolas). Dr. Kenny was a native of New Zealand who came to London to study medicine in the 1880's. The couple had two other children, daughters, Elfreda, born in 1896 and Magdeline, born in 1897. On 18 June 1898, Mary Kenny and her three children took passage on the ship Loch Garry for Melbourne, Australia with their ultimate destination being Auckland, New Zealand. Dr. Kenny, who had preceded his wife, died in New Zealand and the family returned to England where Hilary was enrolled as a pupil in Epsom College.

While Hilary was at Epsom College his mother moved to Westcliff on Sea in Essex and took up residence at 11 Avenue Terrace.  The family were regular members of the congregation at St.Alban's Church and Hilary was both a member of the altar serving team and a much valued Sunday School teacher.   In 1914 war broke out with German and on 4 December Hilary volenteered for The Royal Navy Volunteer Reserve, initially for the Public Schools Battalion but later being transferred to Anson Battalion.

Hilary served with an ant-aircraft gun battery at Mudros on the Greek Island of Lemnos and later took part in the landings by British and Anzac troops at Gallipoli. It was there, while serving in the allied trenches that tragedy struck. At about 6.35 on the evening of 11 September 1915 at Cape Helles, Hilary was cleaning his rifle when it went off, killing one of his comrades who was sleeping nearby. The unfortunate man was twenty-five year old Welshman Able Seaman David James Phillips, who in civilian life had been the Assistant County Surveyor of Suffolk. Hilary blamed the shooting on a mechanical malfunction of his rifle.

On 29 August 1917, back in England, Hilary was commissioned as Temporary Sub-Lieutenant in the RNVR and in December the same year he was drafted to the British Expeditionary Force in France as a member of Anson Battalion, Royal Naval Division. Although a unit of the Royal Navy the Division served as infantry. Hilary Kenny was killed in action on 26 March 1918. He is listed among the dead on The Arras Monument in France. 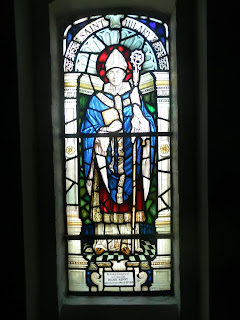 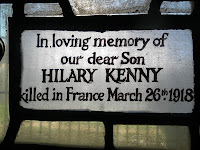 Hilary Kenny is commemorated in three places in the church, most prominently in a stained glass window in the vestibule of the south porch. The window (paid for my his mother) depicts St.Hilary who was the 43rd Pope but the face (see above) is the face of Hilary Kenny. He is also remembered on the left hand altar rail in the Lady Chapel and again on the Great War War Memorial Plaques near the High Altar.

Special thanks to : Jack Clegg's Memorial Database of Royal Naval Division Casualties of The Great War.