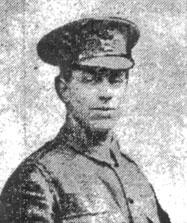 Reginald William John Shears was born 2 September 1887 in Etheldon Road, Shepherd's Bush, London.  He was baptised at St. Stephen's Hammersmith on 20 August 1891. His parents were William Henry Simmons Shears and his wife Dora Harriet. In 1901 the family were living at 57 Cambridge Road, Willsden with Reginald and his sister Norah Renee Alicia. By 1911 the family had moved again, this time to 38 Anerley Road, Westcliff, by which time Reginald was working, like his father, as an architect's assistant. He volunteered for the army when war broke out in 1914 and was posted as a Rifleman to 1/9 Battalion Queen Victoria Rifles. He was killed in action on 1 July 1916. Soon after his death the family moved to "Oban" Blackness, Crowbridge, Surrey. He is also commemorated on the Thiepval Monument in France.
Posted by ernest at 14:28