Percival George Clappen was born in Wickford Road, Westcliff in 1898. His father was Edward Smith Clappen, an Ironmonger who traded from Milton House in Southend High Street. Edward and his wife Florence May (ne' Berry) lived at "Corinium" which still stands today on the corner of Wickford Road and Hadleigh Road in Westcliff. The house, which backs onto the railway, was formerly a splendid building which like many in the area had stables at the rear but today is divided into rented flats and is rather rundown and sad.  On the 1901 Census Edward is listed as "living on his own finances" and by 1911 he is "Retired".  Their first child was named Edward Smith Clappen after his father but he tragically died in an accident in 1900 just before his eighth birthday. 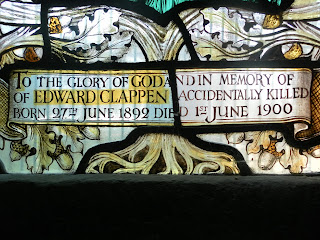 More children followed, Donald William in 1895, Percival George in 1898 and Archibald John in 1901. Curiously, the 1901 census also lists a daughter, Eleanor, although so far I have been unable to find a registration of her birth. It is, however, certain that she did exist as she later married one Thomas G. Southy.

The third child of the family, Percival George Clappen was the first of the family to be born in Westcliff, the birth of his two elder siblings being registered in West Ham. The family regularly attended St. Alban's church and, presumably, it was there that Percival was baptised. When war broke out in 1914 young Percival enlisted and served in 1st Battalion, London Scottish Regiment. Like so many of his generation Percival George Clappen was mortally wounded at Gommecourt Wood in France on 1 July 1916 - the first day of The Battle of the Somme. In his memory his family had a window dedicated to him in the church and it can be seen in the South Aisle. The window features St.Edmund and next to it, featuring St.Martin, is a window dedicated to his brother. 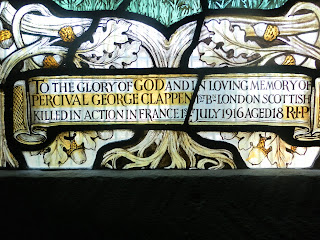 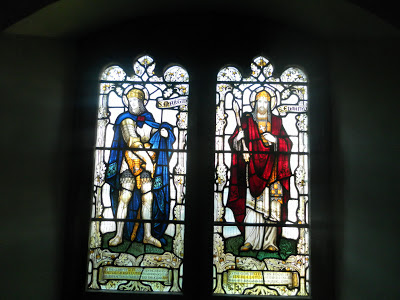